Based in Hungary, Buffered VPN is a relatively new VPN service on the scene as it was only released to the public in 2014. This, however, hasn’t stopped them from becoming one of the largest VPNs in the world.

A major perk of Buffered VPN for Australians is that the service offers uncapped speeds, unlimited data use and unlimited server switches. That means you can use your unlimited NBN connection until your heart’s content and not need to worry about being slowed down or cut off by the Buffered VPN.

The service’s high-speeds and five simultaneous device support mean streaming movies and TV shows is a breeze whether you’re connected to Europe, the USA or Asia. Though there is no free trial, they do offer users a full money back guarantee within the first 30 days.

Lastly, for those who place a high value on their internet privacy and don’t agree with the Australian government’s latest censorship and data collection laws, Buffered VPN has you covered with a zero logging policy on all user internet activity. But by far, the biggest advantage that Buffered VPN has over many of their competitors is in regards to their superior network quality and blisteringly fast speeds.

Buffered VPN currently offers three different plans for their service, with prices depending on the length of time you want to be connected to the VPN.

Speed is where Buffered VPN really shows its lead over most other VPNs. Regardless of how many bells and whistles a VPN service provider may offer it’s customers, if their network speed is not up to scratch, they would not be someone we would recommend.

Aussie users will be happy that our high-speed NBN connections will be sustained when using Buffered VPN. A strong, stable connection at almost all times meant that in our testing we noticed speeds were excellent at all times. Buffered says that their technicians invest a lot of time and money into ensuring that all of their servers remain fast and secure no matter what. This is one of the reasons Buffered VPN is a little more pricey than its competitors.

We believe that a significant percentage of VPN users would prefer to pay a few dollars more each month, in return for blisteringly fast performance and server speed.

Buffered VPN software utilises a technology known as 256-bit Blowfish encryption to make sure that your data remains private, and out of the hands of hackers – or the Australian government. Representatives from Buffered stated that they chose this encryption method due to several key advantages that it holds over other forms of data encryption:

The use of dynamic shared IPs is one other security feature that we really liked. Essentially the way it works is that all users connected to Buffered VPN servers share the same set of IPs. Periodically throughout the user’s session, the IPs are swapped with other users. This is an added layer of protection because if anyone was able to somehow get access to your data, they would not be able to determine which user was actually sending that data since the IPs assigned that data are in fact shared and recycled periodically during the session.

One minor inconvenience for us in regards to the software is that there is no Kill Switch. That would mean that if your VPN suddenly drops out, all of your personal data is revealed including your location and IP address.

Most users won’t find this too much of a concern, though, if you’re a user who really needs security or anonymity, this could be a major issue for you.

Buffered vpn application runs on all modern devices including: 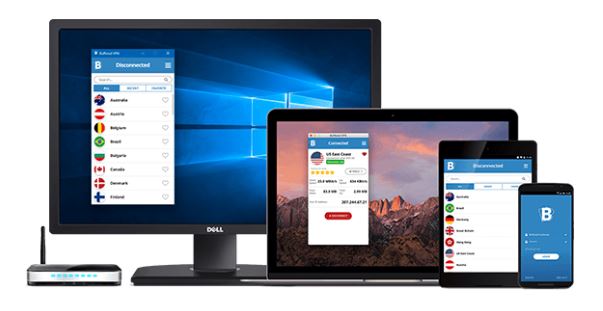 Although Buffered VPN is a relatively new VPN company, that hasn’t stopped them from massively expanding their service. They boast high-speed servers in 45 countries. Their server count isn’t quite as large as other companies, through their investment in quality servers means speeds are still extremely fast and dropouts are uncommon. We don’t think our Australian readers will have any issue with Buffered VPN’s server count or number of locations. 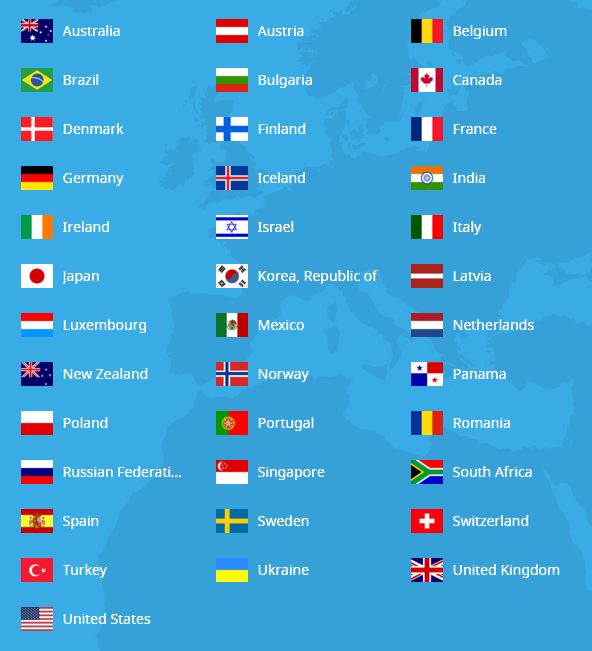 Buffered VPN provided us a statement outlining that their main focus was expanding slowly and focusing on quality, secure servers rather than investing in a large number of cheaper servers. For us, a focus on network speed seems like an entirely appropriate approach that most VPN users would appreciate.

All the Buffered VPN apps come pre-configured with the correct VPN protocol, so beginner VPN users will not need to be concerned with such technical details. However, for those users who are more technically minded, the following is information on the VPN protocols that are supported:

The Buffered VPN logging and data retention policies were fantastic in our opinion. Users in search of a major focus on privacy and anonymity will certainly find it here. Buffered VPN says that they don’t retain any data other than that of the VPN session itself.

These logged data sets are nothing to be concerned about as the majority of VPN service providers do log this type of data as a means to strengthen their services and learn about which resources need to be allocated where. In our opinion, this data can be certainly classed as anonymous as there is no way for anyone to identify you from the data collected.

When we emailed their technical support team for additional clarification and confirmation of this logging policy they stated: “We never log anything related to the content you’ve accessed”. For the vast majority of VPN users, this approach to data logging would be entirely acceptable.

Their Buffered VPN website is simple and yet provides every detail about their services and policies. They have a privacy policy and terms and conditions, and it’s always recommended to read them so that you don’t get hit by any surprises. They also have a blog that will help you with any questions that you may have.

The Live Chat support function was underwhelming when used on an Australian timezone. General quality of support and the responses we were given were not particularly helpful. 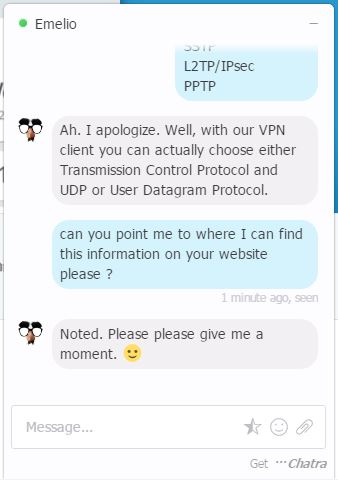 The customer support person that we chatted with was polite and courteous. However, when asked technical questions about which VPN protocols were supported, the responses were vague and at times incorrect.

Furthermore, whilst most questions we put to them were eventually answered, it took some time to get the correct answer as the Live Chat operator had to continually go off and find the answer. The questions that we asked were really quite basic (and ones that would have been commonly asked by most other new users), so we would have expected the Live Chat operator to have those answers on hand.

Buffered VPN is based in Budapest, Hungary.

Whilst they are indeed located within Europe, importantly Hungary is NOT part of the very contentious 5 Eyes security alliance which includes Australia, Canada, New Zealand, United Kingdom and the United States. Being located in a country outside this group provides an added layer of protection for Australians using the Buffered VPN service.

Buffered VPN is a relatively new VPN service provider based in Hungary, however, they don’t seem to ‘act their age’ so to speak. A massive global network of high-speed servers, deep levels of encryption and affordable pricing structures make the service one of the best that Australians can choose from. We would say that their greatest strength above all else is their unmatched speed.