HideMyAss is the largest VPN service provider in the world with over 720 vpn servers in over 190 countries around the world. A large number of these servers are located in the U.S. They have at least 1 server in almost all countries. For many customers, having the ability to quickly and easily connect to a huge selection of vpn servers around the globe is probably one of their biggest selling points.

With HideMyAss, you can bypass online restrictions to get access to your favourite websites and services. And of course, like all VPNs, it will also give you protection against hackers and government surveillance tools. They offer a wide range of free apps that work seamlessly across all your devices, including: windows, mac, ios and android. As part of our testing, we found that their apps were extremely easy to download, install and use.

Despite having great server hardware and apps, we also found some issues that we were not impressed by. Notably, these were issues relating logging of data and data retention. These are discussed in detail in the following section of this review.

HideMyAss currently offer x3 different plans for their vpn service, with prices varying according to the subscription period:

HMA offers lots of free services that show their commitment to online privacy and security. Here are some of them:

This is a free service that got HMA off the ground. HMA still uses this platform to promote their VPN services to new users.

HMA offers an anonymous email service. Your email address will end with @hmamail.com. Using this email address you can send emails anonymously. This is a self-deleting email account.

The HMA File Upload is a nifty feature that allows you to send password protected files. The recipient can only access this file with the password you share with them. You can also specify the region and the IP or IP address ranges where the file can be downloaded. And if you set the file on self-destruct mode, it will auto delete.

HMA does not support the Split Tunneling feature. However, their Secure IP Bind feature behaves more or less like the Split Tunneling tool. This feature requires you to identify apps for which you need VPN protection. It will kick in when you try to use these apps before switching on HMA. This feature also works when you lose the connection with the HMA server. The IP bind feature will disconnect you from the internet until you reestablish a connection to their VPN server.

One of the biggest strengths of HideMyAss is the size of their network, which is vast and extensive to say the least:

Having the flexibility to quickly and easily connect to different servers in different geographical locations all around the world, is a key capability of any good vpn service provider. In this regard, HideMyAss is a stand-out performer.

In contrast to the comparative advantage that they enjoy due to their vast server numbers, one of the biggest downfalls for us with HideMyAss is the fact that this company is based in the UK. As such, they are ultimately subject to UK privacy laws, which among other things forces them to log users IP Addresses and retain logs of user activity. See below for more details on this.

For some reason, the list of VPN protocols that HideMyAss supports is not clearly displayed on their main website. To find this information we had to go digging deep down into their Support pages. From this, we can only assume that HideMyAss is targeting their service to the ‘average’ internet user who is not overly concerned with technical details about protocol support.

We found it difficult to find the Logging Policy for HideMyAss on their main website. There were no obvious links to it from their home page. However, after digging around for a while, we found the following within the Legal section of their website.

We did note however, that HideMyAss does retain VPN Data on their servers for a period of time ranging from 1-3 months. For those that are looking for the highest levels of online anonymity, this would not be acceptable. However, if you are simply looking for a vpn service for other non-critical applications (e.g. streaming website content outside of your region, video gaming, etc) HideMyAss VPN Data retention policy should not pose a problem.

Unfortunately for us, when we recently tested their customer support response times, we found them very slow. We tried contacting them via their Live Chat function, but when we did not receive a response from anyone after waiting for almost 10 minutes, we gave up. 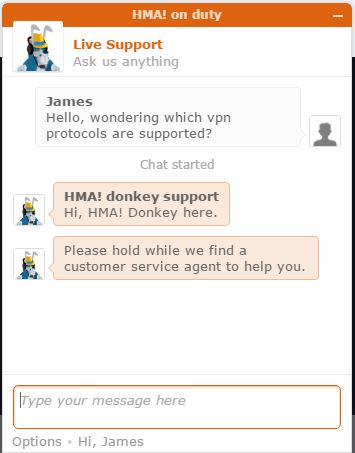 HideMyAss is a compatible with a variety of devices and operating systems. They offer dedicated VPN clients for Mac, Windows, Android, and iOS. They also have smartphone apps for iPad, iPhone, and Android. Unfortunately, there is currently no app for Linux.

A positive point was with the Windows and Mac apps that we tested. We found both of them a pleasure to use (in comparison to some app from other vpn service providers). They were quick and easy to install, and we were up and running with them in no time. More importantly for novice vpn users, the HMA app was very intuitive to use, and is supported by a comprehensive set of video and text based tutorials. HideMyAss has done a great job with their apps in keeping them clutter free and easy to use. 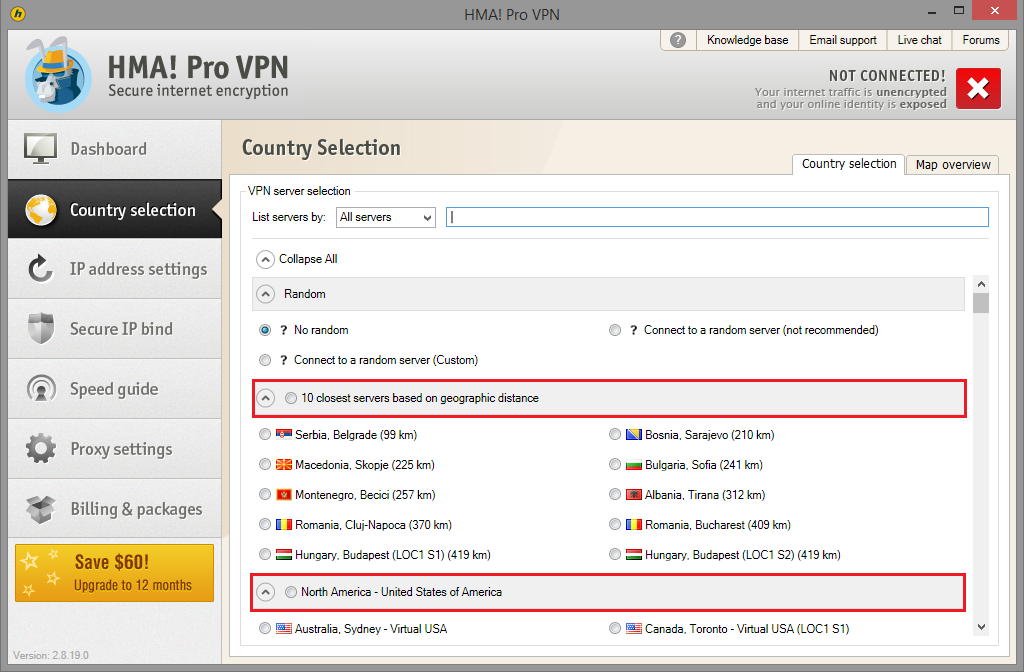 HideMyAss is based in the United Kingdom (UK).

The importance of this point is that it means that they are subject to the highly contentious data retention laws laid out by the UK government. The UK is also a member of the 5 Eyes group, which is an intelligence alliance comprising Australia, Canada, New Zealand, the United Kingdom and the United States. For those users where maintaining anonymity from these Government agencies is critical, this may be sufficient reason alone for not using HideMyAss.

HideMyAss is a huge corporate company that have invested alot of money into their vpn server network. Similarly, they have invested heavily into their app development which are easy to install and use, even for novice vpn users. However, our biggest concern is the privacy issue. With HideMyAss being a UK company, their data retention obligations are indeed valid points that persons considering using their service do need to bear in mind.