If you’ve ever looked into VPNs in 2022 you’ll have noticed that almost all signs point to ExpressVPN. The jewel in the VPN industry’s crown, ExpressVPN is the only VPN service provider to pair deep encryption with a privately owned fibre optic network. If you’re after a vpn service with all the essential internet privacy features (including the ability to stream Netflix from any location around the world), together the peace of mind of dealing with one of the most well known vpn service providers, then ExpressVPN is your best bet.

Below are the latest ExpressVPN subscription prices, current as at January 2022:

ExpressVPN Deal - January 2022: sign-up for a 1 Year Plan, get 3 months extra for Free, and pay only $6.67 per month. That's a whopping 49% Discount off the regular monthly price! Head over to ExpressVPN now to take advantage of this hot deal!

One of the first things you’ll notice about ExpressVPN is the fact that it’s blazing fast. Boasting an entire global fibre optic network means that your high speed home internet speeds aren’t slowed down by rerouting their web traffic through ExpressVPN. This is one of the main reasons for ExpressVPN being a little more expensive than its competition – the maintenance and upkeep of entirely privately owned fibre network and server array.

A major perk of ExpressVPN’s service is that data speed and allowance are both unlimited. This means that users will have access to these amazing fibre speeds without having to worry about slowdowns or data caps. Stream video, music and download games or files until your heart’s content.

We found ExpressVPN to be very open and confident with the speeds their service offers. In fact, they offer a Speed Test function that allows users to share their own speeds to keep the service honest. This speed sharing function is available on Windows, Mac, and Android.

To get started, simply select ‘Speed Test’ from the dropdown: 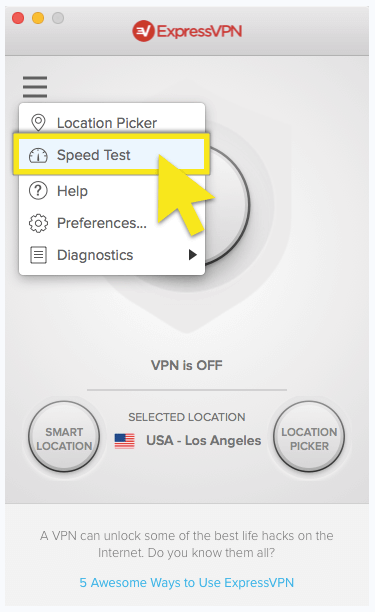 The tool will then automatically detect your current location (or you can manually select it yourself via the ‘Location Picker’ function).

The next step is to simply kick off the test: 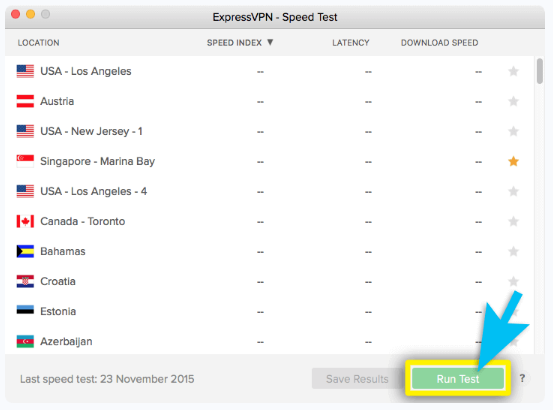 Once the test has completed, a detailed results set will be returned, with information about: Speed Index, Latency, and Download Speed. 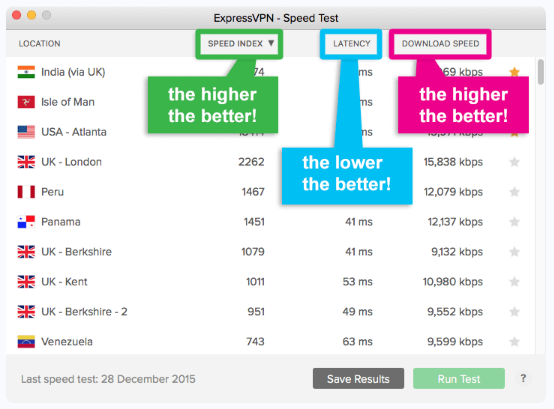 We also really liked the (small but useful !) feature that allows users to keep track of their favorite/fastest server locations, by marking it with a Gold Star icon (see right hand column in image above).

Something users might find is that ExpressVPN’s server count is a little smaller than most competitors with just over 2,000. Though, speed tests that we conducted from our VPNCompass office show that these servers are consistently faster than almost every other VPN provider. 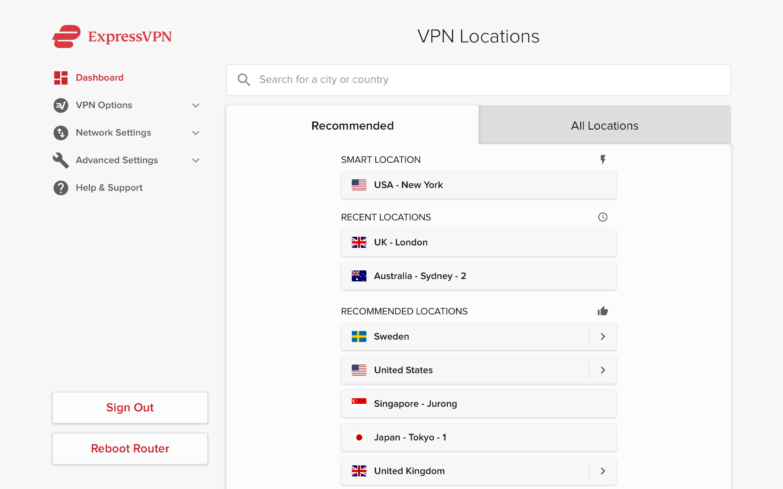 ExpressVPN are consistantly investing in new server hardware, as well as new server locations in most countries around the world. As of September 2019, ExpressVPN has over 3,000 vpn servers in over 164 different locations, throughout 94 countries globally.

The average user won’t need to know too much about the VPN protocols nor will they need to change anything from the default as ExpressVPN automatically selects which protocol for each user.

Though, if you do wish to change or know which protocol you’re using then you’ll be glad to know that ExpressVPN also offers support for all leading VPN protocols – for those that like to get under the hood and tinker with their VPN connection:

ExpressVPN seeks to make it clear that they are first and foremost a privacy company, which means that customer internet privacy is their prime concern. We found it very encouraging that they are also very upfront in regards to what information they do and don’t collect from their customers using their VPN service.

ExpressVPN explains that this information is only logged for admin purposes and to monitor usage across their own network of servers, and to allocate network resources accordingly. They have stated to us that they do not monitor or log any personally identifiable information such as IP address or the time stamp of which a user connects.

Australians concerned about the governments new internet monitoring policies will be glad to know that ExpressVPN is very adamant about recording as little as possible about their users. Their DNS servers even utilise ‘zero-knowledge’ functionality meaning that they do not log user DNS queries in any way.

ExpressVPN offer the standard modes of customer support for their clients. At present, these include:

We put them to the test on these response time claims for Australians. We have tested them on their Live Chat response times and found them to be excellent: 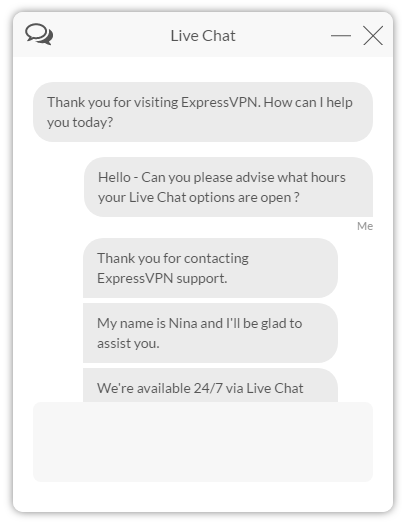 Once we initiated the Live Chat session, we were immediately greeted by a real life person. We were indeed very impressed with their response times. However, we were even more impressed with the informed and intelligent answers that they were able to provide to a couple of basic, yet reasonably technical, questions that we threw at them.

For those that like to be as self sufficient as possible, we found their VPN Setup Tutorials section on their website to be quite comprehensive too. 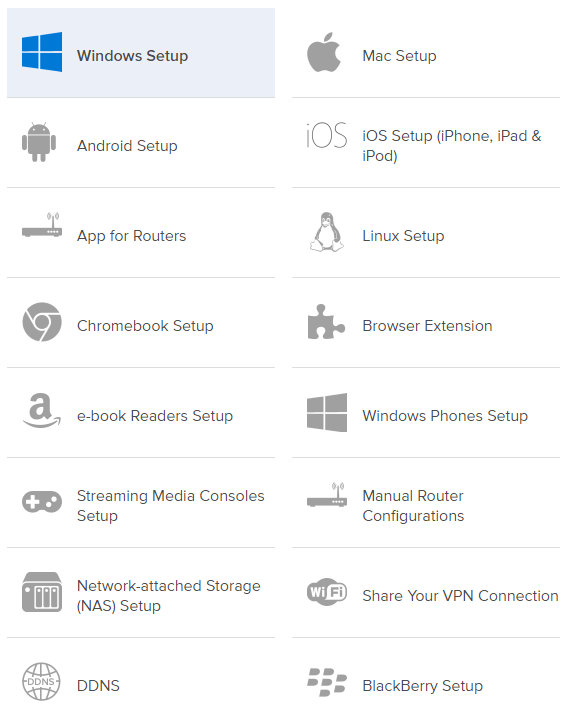 There’s a good selection of documentation across most computer and technology hardware including Windows, macOS, Android, iOS, Routers, Linux, Gaming Consoles, Routers, Smart TV’s to name a few. The documentation is presented in a clear and concise manner with simple steps and images to help get users up and running quickly. Additionally, many of the more popular setup guides included an embedded video tutorial for those that prefer this method.

Since most of us use a multitude of devices each day to access the internet and consume content, it’s great to know that ExpressVPN supports a number of platforms and devices. Experiences on all of these devices are extremely similar too, so you won’t need to worry about re-learning everything if you want to use another device.

ExpressVPN offers a great selection of apps specifically designed to work with your device of choice. Their current list of supported devices includes:

Both of these extensions are extremely useful and allow users to use the internet securely on public Wi-Fi hotspots. Furthermore, they will protect sensitive information from your ISP, third parties, hackers, and malicious websites. These allow users to hide their IP address and location from the websites they’re surfing. And also importantly, it allows user to access content blocked by firewalls, filters, or censorship.

ExpressVPN is based in the British Virgin Islands (BVI).

While some people might incorrectly assume it is subject to the same laws and regulations as Britain, the BVI are in fact a self-governing group of islands located in the Caribbean, who’s citizens elect their own independent judiciary, national police force, and code of laws.

Unlike Britain, the BVI are NOT a signatory to the notorious “14 Eyes” group – which refers to the collection of 14 countries (Britain included) that share military and counter-terrorism information.

The BVI does NOT share any information with any 14 Eyes country.

In our opinion, being a British Virgin Islands based company is a crucially important fact for those VPN users that are serious about internet security and maintaining online anonymity, especially Australians looking to bypass newly implemented encryption and data laws.

There are a variety of payment methods that you can choose from when it comes time to paying for your ExpressVPN subscription.

Credit Card is undoubtedly the most popular option for most users who are just looking for a reliable vpn service provider so that can watch geoblocked streaming content (Netflix, HULU, Disney+, etc). Similarly, we find that PayPal is another great option with many users due to it being tightly integrated with many website and has excellent security credentials.

For those that need that extra layer of security and privacy, we recommend that you take advantage of the Bitcoin payment option on offer from ExpressVPN. This is one area that they really stand apart from many of their smaller competitors, and definitely worth considering if you want to stay completely anonymous whilst online.

Also supported are some more obscure payment methods that will appear to users in countries where the more well known creditcards are not available. Alipay, UnionPay, and GiroPay are just a few of the other options at your disposal should you desire to use one of these. 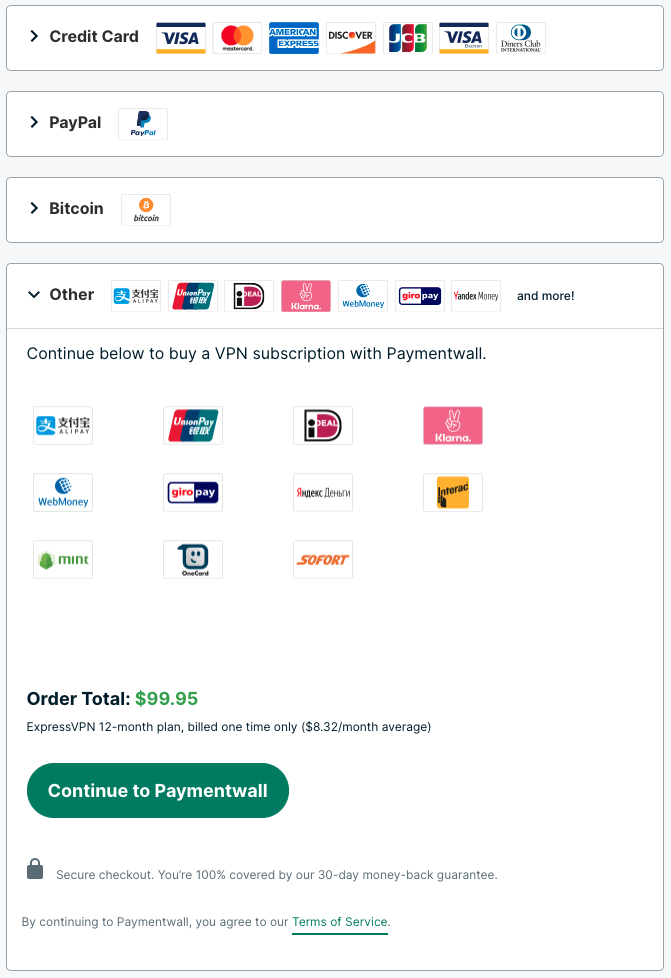 ExpressVPN is arguably the VPN industry’s global leader down to the fact that they own an entire network of fibre optic cabling along with thousands of private servers in almost any country you can think of.

An extensive range of apps, military-grade encryption, high-speed browsing and unlimited data allowance and bandwidth make the service perfect for literally anyone looking to subscribe to a VPN service.

Lastly, we found ExpressVPN’s network speed to be excellent when compared to their competitors. And for those who place a high value on their online anonymity, then zero logging of network traffic is an obvious must-have. For these reasons alone, we have no hesitation in recommending ExpressVPN to our readers.