How to Change Your Location in Pokemon Go (Updated February 2023)

If you’re not an inner city-dweller or live outside a major regional hub, there’s a pretty good chance that when it comes time to play any multiplayer, online or augmented reality video games that rely on local players — you’re often all on your own. You’re not alone in this issue if you’ve ever launched Pokemon Go in a rural locale and noticed that there’s almost nothing on your display. Smaller towns and countries miss out on a myriad of Pokemon, Pokestops and Gyms simply because there’s a far smaller population playing the game in those regions.

We’re glad to say that there is a rather simple way around this, and all it involves is a little location spoofing. We’ve tested and updated our step-by-step guide below in February 2023 to ensure that it still works on both Android and iPhone devices. If your Pokemon Go app believes you’re in a major hub, you’ll soon be inundated with Weedles, Pidgeys and maybe even the ultra-rare Ninetale’s! With all that said, let’s take a look below at how to have a tonne more fun and catching more Pokemons by changing your location in Pokemon Go!

QUICK GUIDE: how to spoof your location on Android

The good news for Android users is that your device’s customizability makes location spoofing relatively simple. Get a hold of ‘Fake GPS GO’ on the Play Store and once you’ve opened the app, choose a great population-dense location like a major city. We suggest going with New York, Chicago, LA or Miami, for example.

Our internal testing found that Fake GPS GO is the best and most reliable Pokemon Go spoofer for Android. Once you’ve installed it and chosen your locations, next step is that you’ll then need to head into your Android device’s settings, select About Device and tap on the Build Number pane seven times. Doing this will enable Developer Options.

Once Developer Options are enabled, tap on the tab and choose either ‘Allow Mock Locations’ or ‘Select Mock Location App’ depending on your device. When prompted, choose your Fake GPS GO app as your location spoofing application.

Now on to the most important step in all of this which is hiding the fact you’re using a location spoofing application as Pokemon Go may ban you permanently if you’re caught. We recommend finding and installing the “Mock Mock Locations” module on the Xposed Module Repository. All you’ll need to do is download and install it like a regular third-party application.

Lastly, you’ll then need to select a reliable Android VPN app to mask your IP address from Pokemon Go. We’ve succesfully used and tested this hack using both ExpressVPN (our preferred choice) and SurfShark. Having said that, ExpressVPN is our go-to vpn because of the huge number of vpn servers that they have in their network. They have over 3,000 vpn servers across 95 different countries. Also just as importanly, if you ever get blocked by the Pockemon Go app, you can simply flick a quick email to the ExpressVPN support team and let them know what has happened. They deal with Pokemon Go queries like this all the time, and can quickly point you to an alternative vpn server on their network which isn’t blocked. SurfShark will also do the job if you’re after a cheaper option, although we found that our success rate in spoofing our location with the vpn to be inconsistent.

Simply head to your chosen VPN’s website, grab yourself a subscription (we recommend you start off by signing up for a basic ExpressVPN account for under $10 USD per month. You can cancel at any time, and there’s also a full 30 Day Money-Back Guarantee in case you’re not happy for any reason) and download the app to your smartphone. Then login to the vpn app and select a VPN server from the drop-down list presented to you. Note: we highly suggest choosing a VPN server that’s close to the city you’ve selected on Fake GPS GO.

When compared to Android, iOS devices and applications are much more difficult to spoof locations with, though with a jailbroken device Pokemon Go spoofing on iOS is possible.

If you do happen to have a jailbroken iOS device or a device with a jailbreak-supported OS and a VPN subscription, then you can begin following our guide below.

With Cydia installed on iOS from your jailbreak, find and install the Protect My Privacy application on your device. You’ll then need to open the application and simply tap the Location text and choose ‘Protect.’ From there, choose a location within the app; again, it’s a good idea to select a major metropolitan hub for your location.

Once you’ve selected a city, open your iPhone VPN app – we had success for this iPhone hack using ExpressVPN. Next, you need to choose a VPN server location that’s in the city you’ve chosen in the Protect My Privacy app. After this new location is selected, you’ll be placed quickly in a location with a tonne of Pokemon, Pokestops and Gyms.

Quick Guide: how to spoof your location on iOS 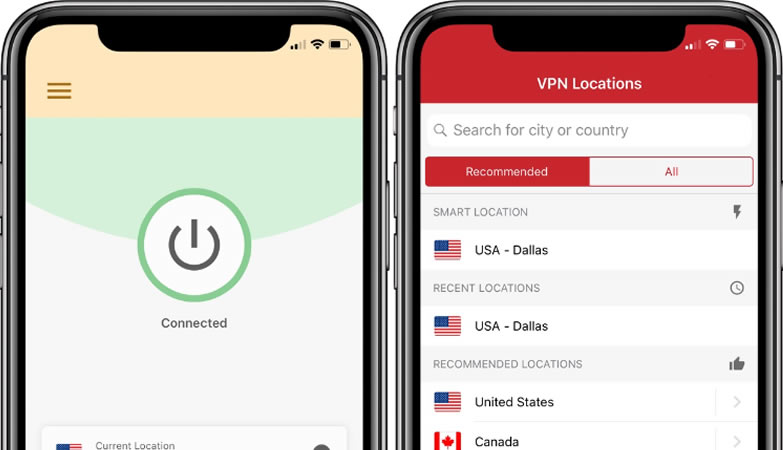 Accessing Pokemon Go from Outside the US

For those of our readers who live in a country or city where Pokemon Go is blocked and removed the application from the Google Play Store, then there’s some good news. In some countries you may also experience that Pokemon Go has not yet been formally released. But thats not a problem if you have a VPN. With a VPN and changing your device’s region to the United States, you can quickly get a copy of the Android and iOS versions of Pokemon Go.

Similarly to the spoofing above, Android devices are generally easier than iOS ones at getting a hold of out-of-country applications. Take a look below at what you’ll need to do.

And that’s it! You’ll be free to download it as you would if you were in the US.

For an iPhone or iOS device, the process is relatively simple, though you’ll need to have a US address and zip code handy. You may also be prompted for payment details which are required whether you’re downloading an app for free or not — for this step you can choose ‘Gift Card.’

Once all of the above is completed without error, head over to the App Store and search for Pokemon Go and install it! Now you have access to Pokemon Go outside of the US and have the ability to change your location to make it a whole lot easier to Catch ‘em All!

Ditto is a cute and cuddly purble blog that most players of Pokemon Go love to catch. But getting hold of him isn’t easy. Part of the reason for this is because he is what’s known as a Transform Pokemen, meaning that he can take the form of other characters and transform at will.

In fact, because he takes the form of other characters, you won’t know that you’ve caught a Ditto until you or someone else that you know has actually caught him! This can be extremely frustrating if you’re on the hunt trying to find the location of the elusive Ditto. We found the best way to locate Ditto is to monitor his location on the Pokemon Discord server. The idea is that as soon as someone has found him they can put the word out as to his location to the Pokemen Discord community. You can then use the Location Spoofing hack that we’ve described above to change your Pokemen Go location to wherever it is in the world that Ditto is currently hiding, and catch him. But you better be quick, he moves fast !

Charmander is another elusive character that is high on the hit list for many Pokemon Go fans. Being a fire-type character, he tends to like warmer environments, so if you’re living in a colder climate country you’re probably going to struggle to find him.

Finding the location for where Charmander is currently spawning is best achieved by checking out the Pokemen Discord community. That way, as soon as someone else (in a warmer country) has located Charmander, you can be quickly advised where he’s at. Once you know that, you can then simply use the hack method described above to spoof your current location (using a vpn and some freeware apps) to head directly to the spawn location. From there you’ve done all the hard work, and it’s now up to you to you to round him up and catch him. Good luck!

ExpressVPN Deal - February 2023: sign-up for a 1 Year Plan, get 3 months extra for Free, and pay only $6.67 per month. That's a whopping 49% Discount off the regular monthly price! Head over to ExpressVPN now to take advantage of this hot deal!