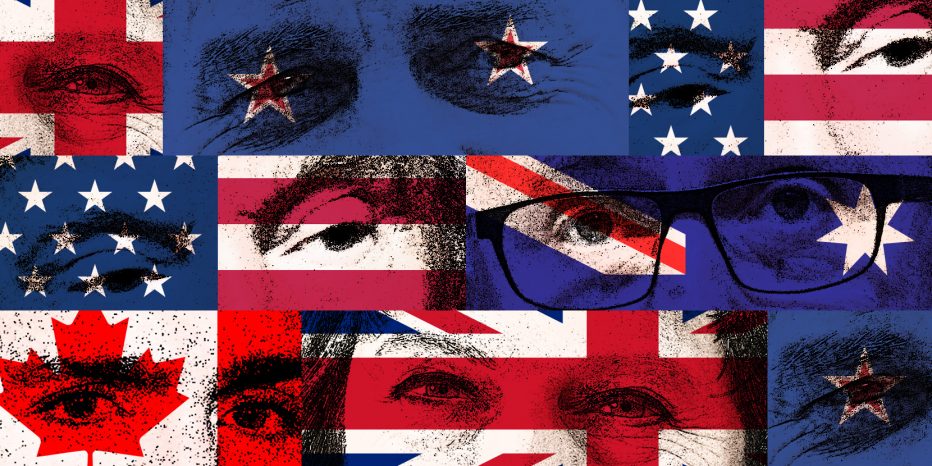 It’s pretty much a given that countries all around the world are spying on their citizens in some way or another. Whether you’re being watched by the NSA, MI5, FSB, or whatever jumble of letters your government uses, it’s a sad reality that no one is ever truly anonymous. What’s worse is when these countries team up to spy on you more effectively.

Some internet users may not know about the “5 Eyes,” “9 Eyes,” and “14 Eyes” arrangements that various countries have with one another. This article will break down what exactly these “eyes” are all about, how they work together, and what you can do to protect yourself as much as possible.

What’s the Deal With These Eyes?

In order to gather intelligence on their citizens more effectively, various countries have signed agreements that allow the partner governments to monitor and spy on the citizens of the other partner countries and report back to them. At the core of each group of “eyes” are the base countries in the “Five Eyes” agreement.

These countries, and their respective areas of monitoring responsibility, are:

What this agreement boils down to is actually quite simple. It’s usually not in the best interest of a government to get caught spying on its citizens: the people would be furious, and lawmakers would be voted out of office and replaced with politicians who don’t want to spy on you (what a novel concept!). But, it’s okay for another government to spy on you, because then at least the people aren’t mad at their own, right? These countries have taken this concept and agreed to monitor the citizens of their partners, and then report their findings back.

Officially called the United Kingdom – United States of America Agreement (UKUSA), this project actually goes all the way back to the 1940’s during the Cold War and has survived through the present day, with much of the focus now having moved to digital surveillance. This project was kept secret from the public until 2005, and in June of 2010, the full text of the agreement was made public and can now be viewed by anyone at this link: http://www.nationalarchives.gov.uk/ukusa/.

In addition to the Five Eyes countries, these governments are part of the Nine Eyes:

In the 1950s, these countries joined the project as “third party” partners. While they are not exempt from being targeted by the original Five Eyes countries, they nevertheless share their intelligence with the Five Eyes for security purposes.

This group includes all countries up to this point, plus:

The formal name of this group is SIGINT Seniors Europe (SSEUR).

How Do I Get Around This Spying?

It’s unsettling to learn that over a dozen countries across the world are probably spying on you. Fortunately, there are ways to combat these efforts and retain your privacy and anonymity. Using a VPN is the most basic and important way to stay safe online. A VPN works by tunneling your browsing data through a protected channel that is only visible to you and the VPN server – anyone else monitoring that connection wouldn’t be able to tell what you’re doing.

Proxies are another effective solution, and work in a very similar way to VPNs by routing your data through a third-party node instead of connecting directly to your destination. Unlike VPNs, however, they don’t offer any kind of encryption.

Private browsers like Tor (and its derivatives) add another layer of protection by using a built-in node system, so that your true location isn’t known to anyone, even the VPN provider. These browsers also don’t store your history like the mainstream applications do.

What Does This All Mean?

Why should the average internet user care about all these eyes and what they’re doing? Aside from the outrage that nearly every modern government is spying on each other’s citizens, the fact is that privacy services which are based in these countries can’t be trusted. This means that VPN providers, Tor exit nodes, proxies, etc., don’t count for anything if they’re based in one of these countries. Since all of these service providers are required by law to turn over their records when the government asks them to, it means that your personal data could be accessed and freely shared with all these governments at any time and for any purpose.

However, before we get too carried away, let’s take off the tinfoil hat for a moment and realize that this should really only matter to those users who require extreme security and privacy at all costs. We realize that people use VPNs and proxies for different reasons, and privacy may not be at the top of your priority list like it would be for someone else. For example, if you’re just using a VPN to access content that is geo-restricted in your country, or to play on game servers in another region, it’s not a huge deal if your VPN provider is in an “Eyes” country. Or if you use a proxy to get around your school’s web filter, it doesn’t really matter there either. This topic is only important for users who employ these tools for the express purpose of protecting their privacy.

If you’re considering a VPN provider or other service to protect your online privacy, it’s important that you determine where the service is based, and if they’re headquartered in one of the “14 Eyes” countries, it’s probably best to go with another provider. Or at the very least, ensure that the company doesn’t retain any kind of activity logs whatsoever, so that, even if they were required to turn over their records, there wouldn’t be anything to look at.