How to watch Good Omens online from anywhere in the world 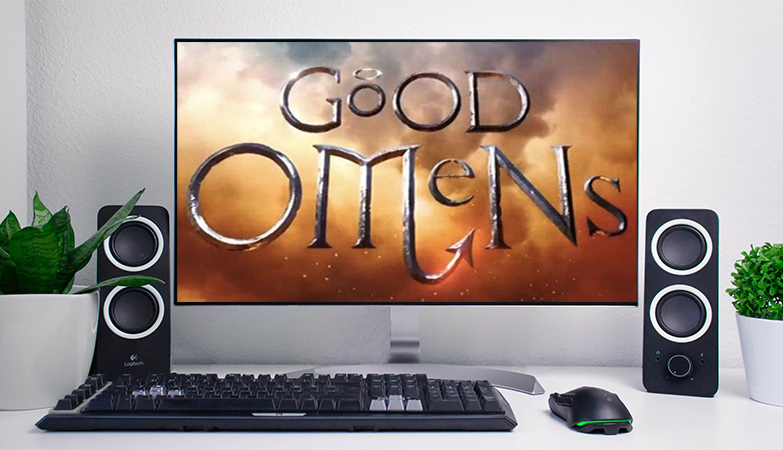 The fight to keep the Apocalypse at bay has never been more fun than in Good Omens. This popular miniseries exploded in infamy after thousands petitioned to cancel it on Netflix despite not airing on the platform. However, those who have seen it swear by its charm and wit. The series follows the exploits of Aziraphale (an angel) and Crowley (a demon) in their efforts to prevent Armageddon; however, it’s easier said than done. As the unlikely pair not only have to contend with the forces of heaven and the legions of hell but also a missing Antichrist.

However, Good Omens’ run on BBC Two is over, limiting viewers to only Amazon Prime or the BBC iPlayer. Typically, this situation is not a problem for American or British viewers when watching at home. But, Amazon Prime and the BBC iPlayer like to region lock their shows. If you live in a restricted country (or if you do have a valid subscription but are traveling abroad), you’re out of luck – no angels or demons for you! That is unless you’re willing to watch it on those low-quality unlicensed streaming sites. Still, those websites are rife with a plethora of other issues (such as Trojans, Computer Virus and Malware!) that you don’t want in your life. Thankfully, as Good Omens has shown us, all problems have their solution. Regardless of how difficult they might seem.

Can I watch Good Omens online from anywhere? Yes!

Enter virtual private networks (VPNs); these unsung heroes protect your identity and allow you to watch shows from anywhere in the world. They’re cheap and affordable services that mask your IP from the geo-restrictions placed on Amazon Prime, BBC iPlayer, or Netflix. You can watch any of your favorite shows without regard to the limits of your country, and yes, that includes Good Omens! But how does it work, you ask? It’s simple, platforms like Amazon Prime rely on your IP to determine the shows you can watch. When you use a VPN, you can select a server with an IP in another country to use as your own. Trust us; it’s easier than it sounds. Just follow the bullet points below for a step-by-step guide on how to signup for a vpn subscription, how to download and install a vpn, and finally how to connect.

Short On Time ? – essential steps for how to watch Good Omens online using a VPN

The British Broadcasting Corporation’s television streaming service comes to you in the form of the BBC iPlayer. Available on all devices such as Smart TVs, Apple products, Android, and computers. It’s essentially the only legal way of watching all shows licensed by the BBC, including Good Omens in Europe. They also offer a worldwide service in the form of BritBox.

The best part is that the BBC iPlayer is a free service that merely prompts you for a postal code. How does that work? British legislation requires citizens to pay for a TV license to watch television. The BBC iPlayer will ask you if you have one while creating an account. However, they don’t verify your answers. So, nothing is stopping you from merely answering yes to that question. It won’t even ask you to enter a license number (possibly to avoid identifying you).

However, there is a caveat; it is only accessible with an IP from the United Kingdom. You’ll need a VPN to access the service while traveling outside of the UK. We’re partial to ExpressVPN primarily because of its lightning fast dedicated streaming servers, easy to download / install / and use apps (PC, Mac, iOS, Android, Smartphone, Tablet), while not forgetting their excellent customer service in case you happen to run into any issues when trying to connect. (Our experience though says that you won’t, it really is a simple and straightforward process to get up and running quickly).

Everyone knows Amazon is the most famous online retailer on the internet. Amazon Prime Video is their foray into the streaming market, and it is full to the brim of fantastic shows. If you’re from the US or just prefer a different interfact than BBC iPlayer to stream your Good Omens content, then Amazon Prime is going to be the best choice for you. Not only can you enjoy a dazzling cup of Good Omens’, but afterwards,  you can watch newer series such as the hit superhero show The Boys. Good Omens premiered on Amazon Prime, and it’s still one of the easiest methods for viewing the show.

Our internal tests here at VPNCompass has shown that ExpressVPN is consistantly the best performing vpn service when it comes to getting around the geoblocking measures put in place by Amazon Prime. We found that it’s very much like a cat and mouse game, in that Amazon Prime is always trying to shut down access to their service from various vpn service providers as soon as they detect them. ExpressVPN though has the destinct advantage of having an active support staff team, that constantly monitor this situation and quickly respond by updating their IPs of their streaming servers whenever this scenario is encountered. As always, if you have any issues at all, shoot the ExpressVPN support team a quick email and they”ll quickly sort it out for you (they even have a Live Chat feature if you prefer to speak with them that way). Furthermore, they offer a full 30 Day Money Back Guarantee, which is great as it allows you plenty of time to give their vpn service a good work out to see if it’s right for you. Follow the link below to sign up – plans start at a very reasonable $12.95 USD per month. Note: you can get an ExpressVPN subscription for as low as $8.32 USD per month if you sign up for 12 months.

What is Good Omens?

Based on the book of the same name, this six-episode miniseries stars Michael Sheen (Masters of Sex) and David Tennant (Doctor Who) as Aziraphale and Crowley. An odd couple that is as different as heaven is to hell. The series currently holds an 84% fresh rating on Rotten Tomatoes and with good reason. Its charming characters and chemistry behind the protagonists make it nearly irresistible. As Aziraphale’s sweet innocence and Crowley’s bad-boy charm and tenacity worm their way into your heart. As a whole, Good Omens has a bit for everyone. People familiar with the bible will love its tongue-in-cheek religious references. Others can enjoy the subtext of the show, as the series enjoys a substantial LGBTQ fanbase. With solid writing and a fantastic cast, you’re sure to love it as well. Sadly, as of October 2020, there are still no plans for a second season of the Good Omens.

Categories: How To Watch